Back to Blog
Case Study

Established in 1982, Ollie’s Bargain Outlet is one of America’s largest retailers of closeout merchandise and excess inventory. Primarily based on the east coast Ollie’s currently operates 280+ stores in 22 states, selling merchandise of all description. You’ll find brand names at real bargain prices in every department, from housewares to sporting goods to flooring to food. We began working directly with Ollie’s in 2016 after being contracted by them to service locations in the Central and Western New York regions. After a few months of developing a solid relationship, we were coordinating service calls in four states; New York, Pennsylvania, Ohio, and Michigan.

Ollie’s reached out to us to get a second opinion at one of their locations in West Virginia. They were the primary tenant on the pylon sign in that plaza and it was completely out. Along with the pylon sign, their illuminated logo on the front elevation had some lighting issues and a channel letter was completely out. Their facilities department anticipated that it would be costly to repair the pylon sign but the initial estimate that they received exceeded their budget by approximately 20%. They reached out to us for additional options.

We immediately realized that there was discrepancy in how they were be invoiced for this sign.  Not only were they being charged for the cost of the repairs but they were being held responsible for the entire pylon sign that had multiple tenants included. After doing a bit of research, our team discovered that the property owner for that location was liable for any maintenance to that pylon sign. Through our diligence and knowledge of the sign business we were able to save Ollie’s 72% on this service call. 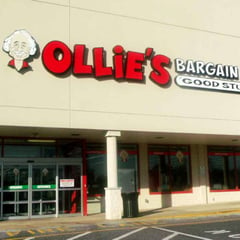 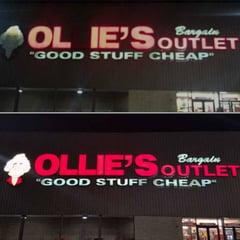 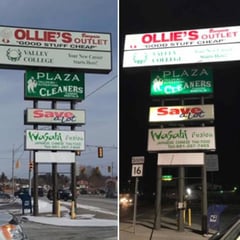